Driving 8 WS2811 strips in parallel with an 8Mhz AVR

During a very short brainstorming session with Vinnie (where Vinnies part of the conversation consisted of mentioning that he had expected an 8-channel parallel version of the WS2811 driver) it became apparent that it should be possible to drive 8 WS2811 led strings in parallel from one AVR. This allows a single 8Mhz AVR to output at a speed of 266666 RGB LED values per second, or 10000 LEDs at a framerate of 25/s.

Doing this requires that the LED data is transposed in memory, i.e. that the first byte contains the first 8 bits of the channels, the second byte the second 8 bits, etc. If your application has the data in rgb-format in memory, some transposition is necessary. Transposition is fairly easy if you've got twice the memory: just create the transposed data by reading and shifting the source data. Doing the transposition in-place, without requiring twice the memory, is more difficult and boils down to in-place matrix transposition. There are many applications, however, for which it is fine to have the data pre-transposed in memory ("bitmap-like" applications can have their bitmaps pre-transposed).

We expect to use this technique in a number of POV applications.

The code assumes one register filled with all ones (255), with alias 'up' and one register with all zeros, under the name 'down'. 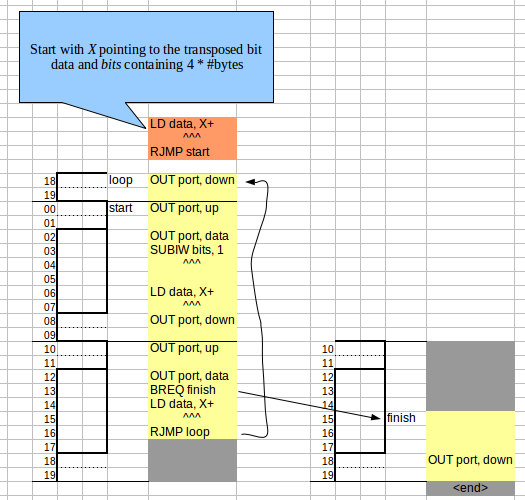 The first step, gathering the R, G and B values boils down to transposing a 8X3 matrix and is solved by "following the cycles". The cycles for an 8X3 matrix can be pre-calculated and ignoring the cycles of size 1, consist of the following two cycles (zero-based indexing):

The code that can perform this transpose looks like this: <source lang=cpp>

This code compiles into a compact list of assembly instructions, essentially two instructions for each swap: