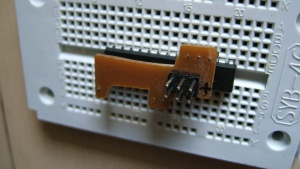 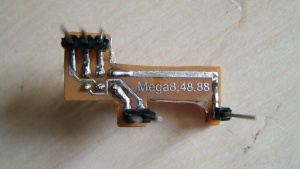 The first prototype was for the Attiny2313 and did just that; it connected the programming header pins to the appropriate pins. This is the basic straddling header with a 6 pin header. Initially I made two versions; one for the Attiny2313 that I was using a lot at that time, but the Atmega8 and Atmega88 were beginning to become my favorite development MCUs, so I designed some for those too (the Mega8, Mega48 and Mega88 have the same pin layout, so it's a better investment than the Attiny2313 header). I chose to have the cupper on the underside of the board, that way the pins would be able to handle more of a downward force. However, removing the boards had to be done with great care (both installing and removing the board rarely happens by the way, so this is not a very big issue). I used slightly longer pins, but that might not even be necessary. You solder the pins first, on a flat surface, so they level up with the top side of your board. You keep the plastic supports for stability. The plus sign indicates the polarity of the programming header. 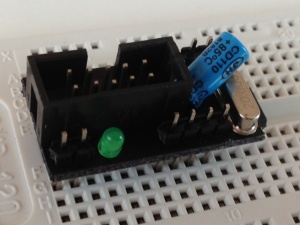 Definite Header Top - You can hardly see it, but there's an Atmega88 under there! 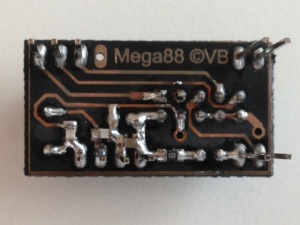 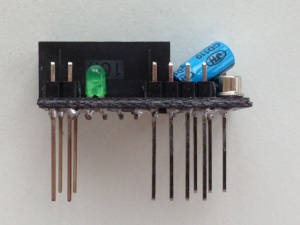 For my class of students I designed the 'definite' straddling header, that also included some stuff that almost every AVR circuit needed and that was more or less 'fool-proof'.

When making the boards, it's important to take the surplus board next to the pins into account. If there is too much board, it will be hard to use all of the remaining 3 holes of the breadboard row. And sometimes you really need that 3rd one! Make the boards as compact as possible.

Another small error in the design layout is that the IDC sockets are much wider than one would expect, so the 10uF capacitor had to be tilted to mount it, because the PCBs had already been made. I've made a new design that fixes these errors (the tilted capacitor, the jumper and the remaining ground pins of the IDC).

The latest design, in Eagle format can be downloaded here, or by clicking on the PCB layout diagram.