Difference between revisions of "Evolution of breadboard programming headers"

Both of us currently use AVRs as our platform-of-choice for most digital projects. We love the diversity, versatility, the straight memory layout, the availability of compilers and, to be brutely honest, the very low prices at which these microcontrollers can be bought.

We typically provide our home-grown PCBs with standard 6-pin programming headers. It may take an extra hour to route the the damn traces for these things on our one-sided boards, but it is generally worth it, being able to re-flash version 0.037 of our firmware.

Additional requirement: being able to disconnect and reconnect the pins frequently is a plus.

This is quite a simple breakout board that doesn't even need to made as a custom PCB: plain veroboard would work just fine. The breakout board consists of a two-row grid of header pins on top that receives the flat cable connector and two three-pin headers at 300 mil distance to be placed on both sides of the aisle running down the board. Most versions of this one that you'll find on the internet provide a straight 6-pin row of breakout pins. I don't know why that is, because this one is a lot easier to make and it sits more compact on the breadboard. The breakout is pushed into the breadboard and then 6 jumper wires are used to connect the programmer signals to the appropriate avr pins. It's quite easy to disconnect and reconnect the cable with this one.

This version has served us well. It takes some setting up for every new project and I found myself doing an image search for "avr programming header pinout" every time I started a new project. 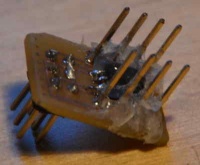 You can find several variations on this design on the internet. In essence they consist of a PCB with an AVR, a programming header and breakout header pins for each of the AVRs pins. Most of them are some form of Arduino-compatible breakout-board. The big plus of these is that you can use them to adapt your SMT AVR to be used on the breadboard. The image shows a shoddy version that I created when I only had SMT attiny13s readily available.

To my best knowledge, it was Vinnie who invented this. This is a variation on the straight breakout. Instead of simply providing two rows of pins, this version offsets the pins in such a way that the board can be placed directly over an atmega8 (or as far as I know: any 28-pin AVR) on the breadboard. Vinnies version adds some extra's to it, like a location for an oscillator and an LED, but the one shown here simply routes the pins of the programming header straight to the AVR pins (I tend to avoid using crystals or oscillators because I find them too difficult and they add to the BOM). 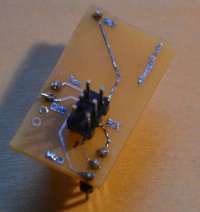 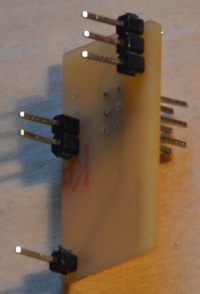