Both editors of the Justintime pages have a Roland TD-3 electronic drum kit. This kit plays quite nicely, but after some years the responsiveness of the hi-hat pedal deteriorates. We are not the only ones who have noticed this; google for 'roland fd-8 issues' to find widespread complaints and hacks/solutions people have come up with. Most solutions try to fix the problem by adjusting the mechanical pressure on the variable film resistor in the pedal.

The principle behind the digital FD8 pedal is quite simple: a hall effect sensor measures the proximity of a magnet attached to the pedal. An attiny13 reads the sensor values using its ADC and determines the pedal position from that. Finally, the attiny sets a digital variable resistor to a value that represents the pedal position.

The schematics (in gEDA format) are part of the GitHub repository. 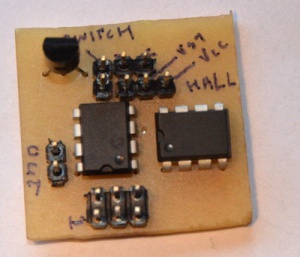 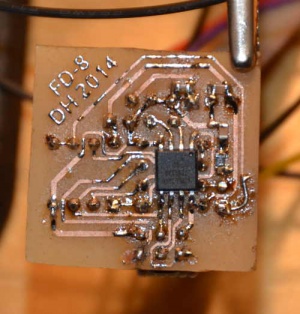 Single-sided PCB routing is fun! Attiny on copper side. 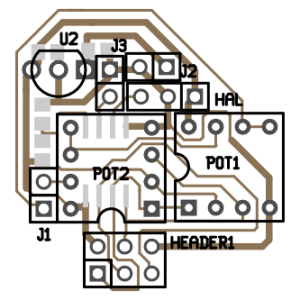 The microcontroller-based version offers 256 different pedal positions at a BOM cost that is still much lower than $10. The components used are:

Pin PB4 is currently not used, but is connected to a header on the print, so that a (momentary) switch could be connected. The idea is that currently the pedal will have to calibrate every time it switches on (determining the range of the pedal), but it would be possible to write the calibrated values to eeprom. The switch can then be used to trigger a reset of the calibrated values. Alternatively, the switch could be used to set set the 'half-closed' point of the pedal.

Because this is a prototype, there is still a 6-pin header on the PCB to reflash firmware. The PCB is designed in such a way that the header can be removed (sawn off) without re-routing. If at some point a single potmeter version would be feasible (using for instance an MCP41050), the second potmeter can also be removed with minimal re-routing. This would result in a much smaller PCB.

An svg-file of the PCB traces that is ready for toner transfer can be found here.

Mechanically, the build is very similar to the comparator-based one. This time around the PCB is somewhat bigger and the leads to the sensor were a bit longer, making it harder to cleanly place everything inside the enclosure. Some hot glue helped in keeping the wires out of the way while assembling the pedal. Because I wasn't so sure about the correct height for the sensor, I just glued it to a sponge and glued the sponge into the housing. This avoids damaging the sensor with an over-enthousiastic stomp.

Just as with the comparator based version, the electronics need their own power supply and for that purpose a socket was added to the pedal housing. Power to the drum computer is then provided through a cable running from the pedal.

The software for this device is available on GitHub. The complete algorithm is in this source file.

The basic mode of operation is as follows:

There are two complexities that the firmware resolves as it performs the above two steps:

The automatic range detection as described above turned out to be a bit too simple, leading to a positive feedback loop (and in feedback loops, positive is rarely a good thing): As explained above, the software automatically adapts the output range to fully map onto the range of received input values. Whenever the drummer stomps a bit too hard on the pedal, the controller receives an extreme input value. The output range is automatically adapted, which pushes the "fully closed" position further downwards. But that means that from that point onwards you would have to push extra hard on the pedal to get the hi-hat to close. Pushing hard on the pedal however would mean that the range would be adapted, etc, etc.

This problem was solved by accepting the lower 1/6th of the range as "lowest position" (writing a 0 to the pot meter). This means that when the drummer stomps a bit hard and the range is expanded downwards, there are still enough positions that are regarded as "fully closed" without having to push too hard on the pedal. This effectively breaks the feedback loop.