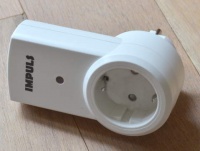 To build this, all you need is a 433Mhz transmitter/receiver pair and a usb audio-"card" (links are to ebay search results). All in all, with the ever decreasing prices for these devices this is about $2,- in materials. Now give yourself a dollar for the soldering work that is about to happen.

What I typically do is use Audacity to record keystrokes on the remote. This will normally record a few repetitions of the same sequence. Playing back such a sequence only once does not work in the average case, so I normally try to find the minimum amount of repetitions that reproduce the switching behaviour and save those repetitions in a single wav-file. I can then use a command line tool such as aplay (I'm on Linux) to play that wav file to the transmitter.